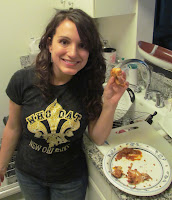 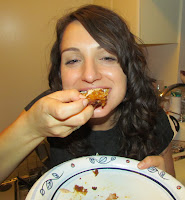 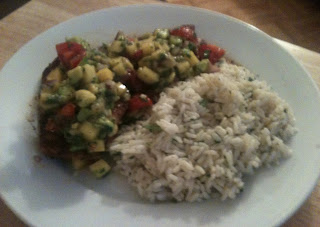 The first winner of the "Follow My Blog" and "Win a Dinner cooked by the Kaptain" was Alex Lindh. As the winner, Alex was served the above dish, a Mole-Rubbed Chicken with Mango-Avocado Salsa and Lime Cilantro Rice.  If you are unfamiliar with mole-rub it is derived from the Aztec word for sauce and is the national dish of Mexico, as important as the Thanksgiving turkey is to Americans, but served more frequently. Unlike the American characterization of mole as a "chocolate sauce," the chocolate is almost incidental. Mole is essentially a red chile sauce with tomatillos that is thickened and enriched with nuts and seeds and augmented by various spices.
I made my mole rub with light brown sugar, chili powder, unsweetened cocoa, ground cumin, salt & pepper.  As Alex calls it, the "cocoa mole chicken" smelled a little funky while cooking it but it tasted awesome.  The avocado-mango salsa was my favorite part (and I'm not a huge mango fan with my meal).  The salsa is made with lime zest, lime juice, honey, avocado cubes, mango cubes, quartered grape tomatoes, chopped red onion, cilantro, and salt.  According to Alex, the salsa was "delectable" and he would recommend a nice dry white wine to accompany this flavor packed dish.  On the side I made a lime cilantro rice (similar to one of my previous meals), which is long grain white rice, chicken bouillon, lime juice, cilantro and salt.
Overall, Alex's final words were, "This meal will leave your palate pleased.  Delish or Leelish!?"
Who's next?  Follow my blog or like my facebook page to be the next one in line for a Kaptainkosh meal!
I've had some request for recipes. If you'd like one, please just email me at Lee.Karchawer@gmail.com.  I get most of my recipes from a few different sites online and sometimes combine different ideas I find.
Posted by Unknown at 9:03 PM 0 comments 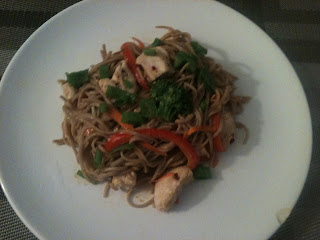 Monday Night Football was started off with some Spicy Soba Noodles with Chicken in Peanut Sauce.  It tasted really good and was surprisingly easy to make. Soba noodles are buckwheat noodles and are a bit darker in color.  To make this dish, I boiled chicken pieces in chicken broth (low sodium, fat free) and let it simmer for about 4 minutes and then another 20 minutes removed from heat.  The spicy peanut sauce is a combination of chicken broth, peanut butter, ginger, soy sauce, honey, crushed red pepper, and garlic.  I added some veggies to the meal also (carrots, broccoli, red peppers, and scallions).

For those who don't know, Soba is traditionally eaten on New Years Eve in most areas of Japan, a tradition that is still practiced today called Toshikoshi soba.

Another pic of the meal: 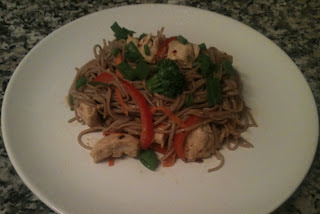 You can add dry-roasted peanuts to this meal too!
Posted by Unknown at 3:17 PM 0 comments 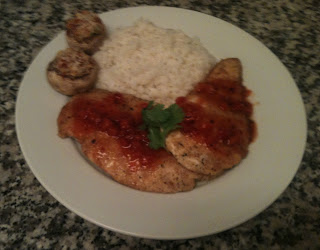 Blast on a plate (bad Jersey Shore reference...).  This meal was really good!  For those who don't know, Pané is a terminology given to meals that are dipped into a mixture of egg (diluted with milk and/or water) and then dipped into crushed up french toast, rusks or breadcrumbs to coat.  The chicken I made was coated in egg (a little bit of water) and then dredged in a mix of breadcrumbs, garlic powder, oregano and seasoned salt.  I had never seen seasoned salt before but it was strangely colored red.  The chicken was then chilled for 15 minutes before cooking it in a pan with veg. oil.


The next part of the meal is the sauce, which really added flavor to the meal.  The sauce is a Sweet 'n' Spicy Red Pepper sauce made with diced roasted red bell peppers, sugar, white vinegar, ketchup, crushed red pepper, garlic powder and paprika.  The combination is boiled and then cooked on med-low heat for about 20/25 minutes.  I made this meal with just simple white rice which was good with the sauce.


The side dish or as I like to call appeteaser, were one of my favorites, Stuffed Mushrooms.  I made them a little differently this time than the previous "Garlic-Stuffed Mushrooms."  To make this, I melted butter in a pan over the stove and then added finely chopped onions and green peppers as well as minced garlic. After that, I added cottage cheese and Worcestershire (pronounce that one if you'd like) sauce and let the cheese mix melt.  Then I added Italian breadcrumbs and put the mixture into the mushroom caps.  Once stuffed, I sprinkled paprika on each mushroom and baked them for 20 minutes.  Once baked, each mushroom was topped with a little Parmesan cheese.  Picture below is before they were baked: 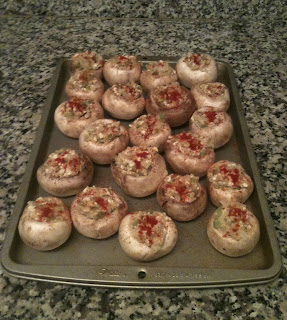 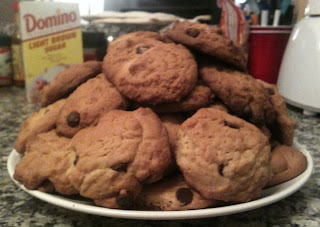 Raise your hand if you don't like chocolate chip cookies...that's what I thought...you didn't raise your hand, did ya!  Well, these cookies were made with flour, baking soda, butter, sugar, brown sugar, eggs, vanilla extract, instant vanilla pudding mix and chocolate chips.  The pudding mix makes them very soft and fluffy.  I'm really excited about football starting tonight and you will soon see a number of meals, appetizers, and snacks for the weekly occasion. Back to the cookies, to be honest, these were not my favorite cookies but they were definitely hard to stop eating!  Another picture below: 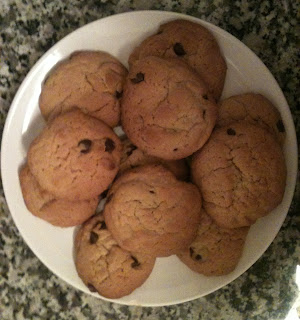 Cookin' with the Kaptain in the 80's: 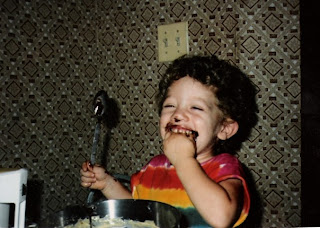 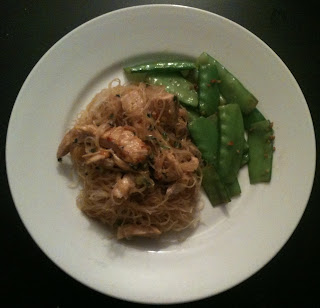 My kind of meal...VERY easy to make.  The noodles are rice sticks or rice flour noodles.  The chicken is made with minced garlic, grated fresh ginger, scallions, cilantro, soy sauce (low sodium), rice vinegar, hoisin sauce and sambal oelek (chile paste).  The chile paste is one of my favorites and used in one of my previous dishes - it's fairly spicy.  I made this dish with sauteed snow peas which were made with low sodium soy sauce and garlic. The total cook time was about 25-30 minutes.  If you like spicy asian food, you've come to the right place - hit me up for the recipe - Enjoy! -KK
Posted by Unknown at 11:57 AM 1 comments

Searching for Onion Goggles to Stop the Tears


So yesterday, I went on a hunt to look for Onion Goggles. I wouldn't say I left my house with the goal of bringing back onion goggles but I was on my way back from lunch with my friend Steve Ryan and figured I'd stop into Kmart and see if they had them.  I ventured up to the kitchen section and found a Kmart employee and asked her if Kmart carried onion goggles.  She looked at me like I was crazy and then asked me for what?  I told her that I recently started cooking and my eyes tear like crazy when I cut onions.  She responded, "No, and that I should close my eyes."  Hmm...cutting onions with my eyes closed?  Don't think so.

At that point, an elderly coupled, standing next to the employee and listening to our conversation, turned to my friend Steve, who was standing to my left and said to me, why don't you just have him cut the onions for you as if to suggest we were gay partners and why wouldn't my generous boyfriend cut my onions for me...  I was truly puzzled at this point, thinking that she believed that Steve and I were partners and he would be there in the kitchen with me to cut my onions.  Plus, at this point, the Kmart employee is looking at me and I can tell she is thinking, "what a cry baby."

As the elderly couple was walking away, the woman told me to try putting the end of matchstick in my mouth while I cut onions.  I did some research on this and I'm definitely going to try it.  Apparently the sulphur in the matches neutralizes the onions.  Here is a link to a blog: http://www.dustyandamy.com/2011/08/matchstick-miracle.html , where someone talks about the "Matchstick Miracle".  I also read that you can try breathing through your mouth instead of your nose.  Fun times.